U12 B team secure Shield title

Our u12b team beat Abbeyfeale utd B  for the 2nd time this season, this time it resulted in claiming an u12 title for Breska Rovers.

The lads started the game a little bit nervous but soon settled and limited Abbeyfeale to just a few sniffs of a chance. Keeper and captain Alex Smith (pictured above) had little or nothing to do in an uneventful first half. 5 minutes from half time we struck gold and got a crucial goal, a scrappy but vital finish from striker Mark Sheehan.

2nd half kicked off similar to the first, a tight and hard fought midfield battle between Breska’s Eamon Collins and Abbeyfeale midfielders. Eamon who broke up a lot of the opponents play stood out for Breska in the game, with young full back John Ross and Keeper Alex also impressing. Rory and Liam also putting in a hard defensive shift for the team.

Abbeyfeale was sure they had equalised when a loose ball in the box fell to their winger who had his shot saved and held by Alex in goal to preserve what would prove to be his 8th league clean sheet and a vital win.

The final whistle blew on what was a tight and scrappy affair. Alex Smith collected the shield for Breska who celebrated a first u12 shield win for the club and a well deserved one, when you analyse the season as a whole.

This team, who were beaten to the league title to Granagh, won 10 games in the league including today, which is a testament to each and every player for their hard work and determination. Well Done lads and enjoy the celebrations! 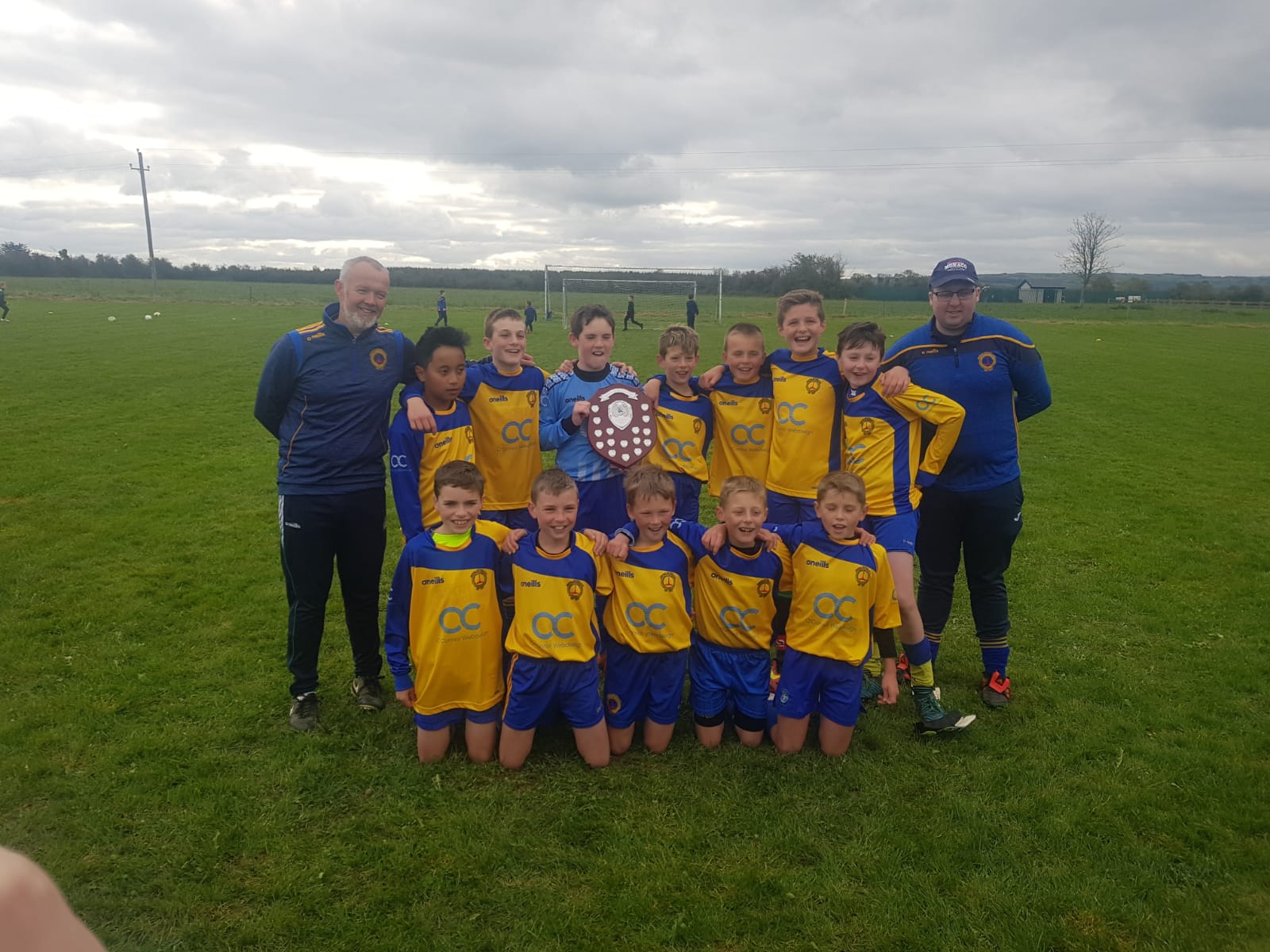 Contrasting results for our u14 & u16 boys teams, Our u14s team winning 3-2 away to Feenagh AFC, Breska raced into a 2 goal lead courtesy of a Barry Toomey goal and a Barry Adams long range free kick. Feenagh however pegged us back to 2-2 at half time, A Barry Toomey header won the game for Breska u14s.

U16s played away to Kildimo in their final league game in the Plate competition, unfortunately losing 7-3, hard luck to the lads on what has been a difficult season.

Elsewhere our u10s boys, u8s boys and u8 girls were all in action on Saturday.

Big congrats to both Ava Byrnes and Isabelle Fitzgerald for making the U11 Desmond League squad.

Both have been impressive on our U10 girls team and are worthy of their place in the squad.

Junior and Ladies Round Up

On a busy Sunday for the club, our three adult teams were all in action. Our A team hosted Shountrade while our B team made the long trip to Mountcollins. Meanwhile, our Ladies crossed the Cork border to face Charleville in their third league game of the season.

The Junior A team made it four wins from four in league action, eventually accounting for Shountrade in a wide open game in Clarina.

Niall Quane opened the scoring after 90 seconds, slotting home after the ball rebounded off the crossbar. The visitors responded in the third minute to make it 1-1. Kevin Foster was next to find the net, firing home at the second attempt after the on-rushing keeper denied his right footed strike. He showed composure to pass the ball into the gaping goal from outside the area to regain the lead, all within 7 first half minutes.

It was 3-1 before the game was 20 minutes old. Foster cleverly meandered down the left wing and from a near impossible angle, rifled home, via the crossbar, from the end line.

Shountrade found a way back into the game and had another goal shortly afterwards.

Shountrade would level the game at 3-3 in the 80th minute. Thankfully, there wasn’t too much panic and midfielder TJ O’Connor found the winner in the 86th minute, to put Breska top of the table after four rounds of games.

Mountcollins 3-4 Breska Rovers B
Our B team returned to winning ways after a disappointing few weeks thanks to a hard-fought victory over Mountcollins on Sunday afternoon. While Leonard Coughlan may be the hero with a hat-trick, it was a determined display from all involved on an extremely challenging conditions.

Tom Clancy opened the scoring with a header in the opening minutes, after some good work from striker Keith Punch. The lead was quickly doubled with Josh Adams’ free-kick was headed into the top corner by Coughlan. The would add a third header before the half-hour as Breska appeared ruthless, and were doing so much right.

However, the hosts, who are also a newly formed team, pulled two quick-fire goals back to leave it 2-3 at the break.

A bright opening to the half saw us re-establish our two-goal lead, as Leonard Coughlan scrambled home, for his 7th goal of the season.

Mountcollins were thrown a lifeline with around 30 minutes to go, making it 3-4 from the penalty spot. From here, it was a battle, as the soft pitch made for a poor spectacle. However, Ivan Coughlan, Adams, Tommy Collery and Dara Punch all guarded Seamus Lyons’ goal late on. Tom Clancy missed a sitter late on, hitting the bar from close range, before Collery deflected a Mountcollins shot onto his own bar.

Thankfully, we held on to secure our second win from four outings, and leave us in midtable early in the season.

Goals from Pauline Vijandran and Melissa Kavanagh weren’t enough to secure the ladies first point of the season away to Charleville.

Subject to change, please check with manager prior to travel etc

Subject to change, please check with manager prior to travel etc