The 2021/22 season has come upon us in recent weeks and the pitch in Clarina has never been as busy. We’re delighted to see our Mens and Ladies sides on the field of play but more importantly, the youngsters through all the ages have been representing our community with distinction in recent weeks. Please support our teams where possible during what we hope is a successful season for Breska Rovers.

U9s
Broadford United v Breska Rovers
Our U9s were in Broadford United for the first game this season. A strong performance in both attack and defence from our youngsters while there was great excitement for the parents who travelled. 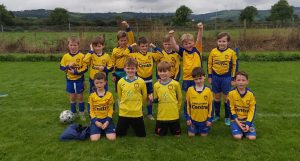 This game was also the first time that Breska Rovers have been able to field an U14 girls team and with 18 girls in attendance, the future is bright for girls soccer in Clarina.

Division One:
Breska Rovers A 1-2 Abbeyfeale Untied A

A thrilling game in Clarina on Wednesday evening last as these boys played their first competitive game (ever!). And competitive it was from start to finish, with the boys from the Feale coming out on top in the odd goal in three. Eoin Hennessy scored a well taken penalty. They boys enjoyed the experience and certainly learned from this against good sporting opponents.

Goals galore in Clarina as our U13s got a hard earned victory over Newcastle West Town.
On the scoresheet were Cathal McCormack and Joey O’Regan, each with three, while Danny Quinn and Cian Dillon also found the net. Credit must goto the entire squad who are learning quickly about 11-a-side football as they’ve moved up from the smaller pitch. A fantastic effort was required after the visitors fought back, but Breska finished stronger to get an impressive eight goals.

Goals from Bobby Smith (2), Darragh O’Sullivan (3), Seán McGrath (2), Seán Coughlan (2) and Colm O’Flaherty gave Breska a comprehensive victory over Ballingarry. Credit must goto Ballingarry who battled gamely for 90 minutes and now have two teams at this age group. A good start for Breska who have two wins from two.

Inter-League: Well done to Ryan Foley, John Ross O’Reilly and James Byrnes who represented the Limerick Desmond 13’s Academy Team against Kerry in Tralee on Sunday. Jack McCarthy was unavailable due to illness. The boys are continuing their progression and we’re delighted to see them representing their League.

Our Youths kick-started their season with a strong display at home to Askeaton. Goals from Darragh O’Sullian (2), Barry Adams, Seán McGrath and Bobby Smith were enough to get us off to winning ways in the Divisional Cup competition.

Darragh O’Sullivan headed us in front before Askeaton pulled one back.

The Askeaton keeper made some fantastic saves but in the 30th minute Darragh O’Sullivan popped with his second to give us a half time lead.

Barry Adams added the third with a lovely free kick. From here, it was comfortable with a good team goal coming from Sean McGrath to make it 4-1. To top it off Bobby Smith scored to help round off a good team performance. Cian Purcell made his debut at this level in goals late on, playing the last 10 minutes.

Our Junior Teams are sponsored by BHP Laboratories – BHP.ie

Our A team officially started their domestic season with a hard earned but deserved victory over Pallaskenry. Despite taking an early lead through a well taken James Purcell penalty, the hosts fought back and fired in three quickfire goals to lead 3-1. However, given the good form of our A team there was little panic and Mark Moroney, making his first start for the side, raced onto a Kevin Foster pass to make it 3-2 at the interval. We owned much of the second half and  Josh Moloney was denied a goal when drilling a shot early in the second-half.

Breska were level with Tom Clancy’s over hit corner-kick was recycled by Sean Healy. Healy’s cross was headed goal-wards brilliantly by Chris Guerin and it trickled over the line for the equaliser.

The lead goal came from substitute Keith McNicholas, after a good cross from Guerin.

Sean Healy was on the scoresheet with a back-post header after McNicholas flicked a Clancy corner on at the near post. There was time for one more as another sub, Niall Quane unselfishly played in McNicholas who finished tidily beyond the keeper. At the other end, Foster and Purcell ensured a more solid second-half showing, while Keith Punch showed his usual energy alongside TJ O’Connor in midfield.

Our B team were unlucky to lose out to Glin Rovers B on Sunday afternoon, when falling to an 80th minute header from a corner. It was an ultra competitive game from start to finish with defences on top for large periods. Breska had impressive showings from youths players Seán Coughlan and Seán McGrath while another, Darragh O’Sullivan was MOTM on his adult debut.

Disappointingly, it means we’ve now lost two of the four games in this cup group, but there is still a chance of addressing this with games against Abbeyfeale B and Glin B to come once more.

Breska Rovers advanced to the 1st Round of the Munster Junior Cup with a 4-2 victory over neighbours Kildimo United. Goals from Seán Healy, Ethan Keyes, James Purcell (pen) and Josh Fitzgerald were enough to set up a clash with Creeves Celtic, on Sunday 19th September in Clarina (2.30pm).

Breska Rovers Ladies kick into action this Sunday (19th September) as the A team face Abbeyfeale United at home (2.30pm), while the B team travel to new side Feenagh (11.30am).

Club gear: A number of players, at various age groups have taken to the field with the incorrect shorts and socks. Players/parents are advised that blue shorts and blue socks are to be worn in all matches going forward.

These can be bought through the O’Neill’s website, as well as other branded Breska Rovers club gear. Link: https://www.oneills.com/shop-by-team/soccer/soccer-clubs/breska-rovers-afc.html

Membership: Membership is now due for all players. If you have not paid, please visit www.breskaroversfc.com and follow the “Buy Membership” tab.

Volunteers: Like any sporting organisation, we rely on the time of our dedicated volunteers. If you would like to help, please contact any member of the committee. There are various roles which do not involve coaching, and new ideas and expertise is always welcome. “Many hands make light work”.